The Soul Of My Boots

Posted on February 26, 2010 by Martha Phelps Studio ~ creative on purpose 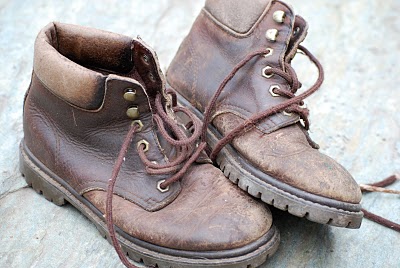 I held my first “real” job during the summer of 1978 in Jackson County, Oregon working for the Youth Conservation Corps which at that time was managed through our local Bureau of Land Management office.Definition of “real” to me at fifteen years old included the following characteristics: an application and interview, a dress code, a commute to work, an absolute starting time and a regular quitting time, Monday-Friday, rain or shine and a proper paycheck (though  minimum wage at that time was $2.65 an hour – so however proper it might have been, is arguable).

In a nutshell, YCC is  a National Parks Service program employing youth between 15 and 18 years old to do everything from clear invasive species, to build and repair trails, to upkeep park’s facilities like playgrounds and picnic areas, to piling and burning slash, to helping demolish old buildings. That particular summer, our main project was building the Sterling Creek trail outside of historic Jacksonville (picture scrub oak and madrone, and very dry soil conditions in the traditional 100+ degree July weather of Southern Oregon). I used tools with names like pulaski, mattock, McLeod, grub hoe, council tool and the ever popular pick axe. Almost all of them involved swinging with a fair degree of momentum and upper arm and shoulder strength, and yes – I was pretty continuously sore that entire summer.

Everyday at 5 am I would drag my grumpy teenaged butt out of bed, make a behemoth sack lunch, fill my canteen, dress in the required gear (long denim pants, long sleeved denim shirt bearing the proud green and white YCC patch, over the ankle leather boots, 3/4 length leather work gloves and a bright yellow hard hat) and walk down to the corner convenience store to be picked up by one of our crew leaders with whom I commuted from Ashland into Medford. We’d arrive at the Medford armory by 6:30 to get our daily assignments and be loaded into pale green BLM vans and on our way by 7 AM. We’d be returned eight hours later – filthy, stinking, red faced, dehydrated, famished and $21.20 richer.

Let me get one thing very clear here. I was not a soft girlie girl at fifteen. I was an athlete, a tom boy of the highest order, a wizened treehouse builder and explorer of all things dirty, muddy and imbedded in poison oak, a seasoned weed puller and gardening assistant to my parents and an avid camper. If anyone could make it in YCC, it was me. Right. After two weeks I was completely ready to throw in the towel – or trowel – or whatever. I had never worked so physically hard in my entire life. Never. Never. Never. And never mind that the 5 am thing was killing me, too! Had it not been for my boyfriend Joe’s dad, I surely would have quit. But he sat me down one evening while I was whining about the work and gave me the most wonderful and positively delivered version of the “Once a quitter always a quitter” speech that I could have ever asked for. He helped me change my mind, and I then became my own agent in changing my life.

Had I quit, in the ensuing eight weeks I would have missed out on learning to build a cross buck fence (a part of which still stands around one end of Hyatt Lake, and I can look at with pride even after 32 years). I would have missed the day we were rewarded by a trip to Crater Lake and the exhilaration I felt while running off the dock at Wizard Island and flying into the icy cold, crystal clear, aqua-colored ancient waters. I would have missed standing with my cohorts by the Sterling Creek sign that declared it built by the YCC. I would have missed being tapped by a supervisor to spend an entire day in the field with a wildlife biologist doing bird counts and especially, tracking down and locating endangered owls in the Cascade Mountains. I would have missed the comedy of peeling off my jeans each afternoon with my gloves still on so I wouldn’t get poison oak from my britches – and the look of respect that my father gave me as I would tell him about my day. I would have missed discovering an essential part of myself – that self that doesn’t just work until it’s hard, but works past the point of “hard” to “accomplished.”

Any what, pray-tell, does any of this have to do with Boot Week in the studio? Well, I was thinking last night about boots I have worn and the life I have experienced while decked out in this particular form of footwear. I kept trying to figure out, which pair of my boots do I “love” the most (aka – which life experience in boots has left an indelible mark?), when I realized – the pair I love the most are the boots I wore that long hot dust-covered summer working for YCC. When it was over, I couldn’t part with them, you see. First of all, after three months of wickedly hard wear and tear, I had worn them to a slipper comfort-like cured quality, and anyone who has ever tried to break in boots will tell you, that’s a beautiful thing for one’s feet. But mostly, they stayed with me as worn leather trophies of a job well done and my literal symbols of the proverb  “walk my talk.”

Two years ago, my elder daughter found them in a box and asked if she could wear them for hiking and service work at school. I took them out, rubbed the cracks smooth with beeswax, and passed them over to her with pride.

...a meandering journal of a changing life and the unexpected graces it brings. Earlier posts may provide some history, but this series of writings aren't likely to follow a straight line as I explore topics such as raising kids, making choices, self discovery, the impact of change on a family and how to (hopefully) live with balance and purpose. www.marthaphelps.com
View all posts by Martha Phelps Studio ~ creative on purpose →
This entry was posted in Siftings and Essays of the Heart and tagged Boots!, Childhood, Honesty, Oregon, Selfhood. Bookmark the permalink.