Posted on April 1, 2010 by Martha Phelps Studio ~ creative on purpose 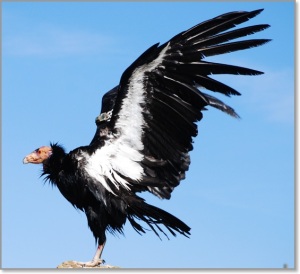 By water’s edge I realize the great bird’s presence.

First, a momentary shadow dancing across the shoreline. Next, leaping over waves, and then back
above the trees.

Instinctively flinching,
I am small prey
(caught)
in the open, before tilting my head to heaven.

He dances!
Gliding on some airborne path of heat
and wind,
purest white, on black, on blue;

ancient god, on earth, in Love –

he dances alone; an aerial soul in single purpose:
to carry Life on wings outstretched.

to balance on the edge of timelessness.

To him,
there is no shadow against the terra firma,
there is no me,
nor is there an earth-bound longing for something lost from Grace,

No fooling, I had the blessing of an opportunity to photograph this amazing fellow in the wild (though it was on a ranch) from about  18 feet away in April of 2008.I was learning to use my (then) new, bigger bolder Nikon and wasn’t sure exactly what I’d end up with. This is one of many incredible shots given to me by California Big Sur Condor – Tag #68 – the first condor born out of captivity since they became a protected, yet endangered species. The poem came later.

...a meandering journal of a changing life and the unexpected graces it brings. Earlier posts may provide some history, but this series of writings aren't likely to follow a straight line as I explore topics such as raising kids, making choices, self discovery, the impact of change on a family and how to (hopefully) live with balance and purpose. www.marthaphelps.com
View all posts by Martha Phelps Studio ~ creative on purpose →
This entry was posted in Poetry (matters), Through My Lens, Written by Herself and tagged Finding God, Original Poetry, Peace. Bookmark the permalink.