Posted on September 1, 2015 by Martha Phelps Studio ~ creative on purpose

My parents are still living. As a matter of fact, their house is just a few blocks away, and my husband and kids and I get to see them pretty much whenever we want. I can walk through their front door and sit down for a chat or share a meal or ask their advice or hear a story any day of the week. Of late, face to face visits are much better than phone calls because neither of them have the greatest hearing anymore. And shorter visits are naturally better than longer ones because they tend to get tired out and dad sometimes nods off during conversations. And taking walks or going to watch soccer matches together means dealing with cumbersome items like walkers and wheelchairs now a days, so we pretty much just hang out at their place. It’s all low key and quite okay. In fact, it’s a blessing.

We / They / I have also lucked out because Mom and Dad are fairly damned sharp (of the mind and occasionally the tongue). It’s true that they don’t hear well, quickly tire, and can’t do laps anymore, but their heads and hearts are intact. Conversations can get quite lively. Advice still flows freely to the grandchildren. Grampa has no shortage of political view (bless his liberal heart) and Gram has strict instructions about her garden. Thus, in-spite of the physical byproducts and fall out of being OLD, they’re still themselves. They’re still my mom and dad. 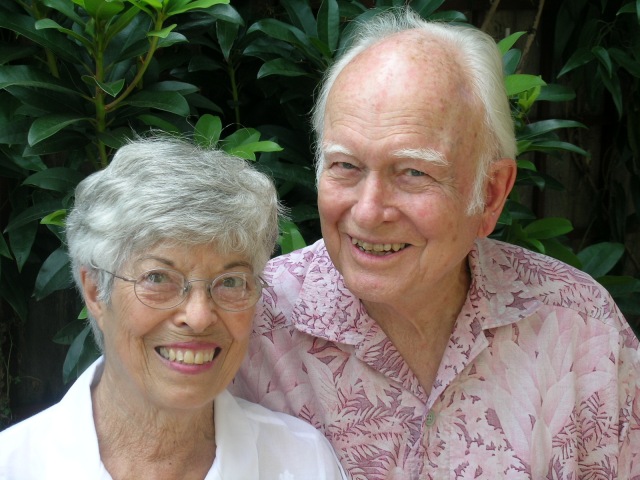 Did I say “OLD”? Yes. (Why the capital letters?) Because they’ve actually grown. Very. Old.
He’s 89, and she’s 86. They’ve been married for 68 years.
They had seven children and raised five of us to adulthood.
They’ve lived in and given to and supported this community for 53 years.
They have seven grandsons and four granddaughters.
Between the two of them combined, they were public educators for nearly 70 years. (Aye caramba!) I mean really, can any pair of people have numbers like those without being certifiably old?

They’ve had long, busy, productive, amazing, no doubt occasionally mundane but rewarding nevertheless, generous, and zesty lives. They’re pretty wonderful individually, and as a duo – are remarkably and uniquely full of a rare brand of wisdom, tolerance, forgiveness and unconditional love that only two souls who are truly matched can achieve. It’s inspiring. It’s also strange to fathom because I’m not sure I’ll ever know two people – separately or joined – who are as beautifully pared as these two. They are the real deal. And I think, even fear – that my parents may be the last of a species I will ever encounter again.

Because they are old and living, but because in truth, my father is now also dying and my mother is struggling, and because we still have some time together (which is a blessing), but because we don’t know for sure how long we have left together, I am trying to pay even closer attention to them than I have ever before. That’s natural, I suppose. We sense that the time we have with the ones we love is coming to a close, so we try to open our thirsty and porous hearts to their fullest capacity. We hope to soak up every drop. We try not to regret the moments that are already lost and focus on the now. “Lord, make my heart a sponge-like instrument of thy peace.”

I walk into their house, and it smells like my childhood. In the cupboards there are dishes that I’ve eaten off of my entire life. The pantry items are so familiar I could name them with eyes closed. I know the way Dad likes his eggs in the morning and his bourbon before dinner. When mom says she’d like a tablecloth instead of place mats, I understand her fondness for the crisp, clean white linen, and when I see the book she’s reading with more than one marker in its pages, I know she has found a passage that she wants to share with someone she loves.

All that is and was familiar become more precious as their abilities and stamina steadily change and decline. The only thing that won’t change, in the end, will be the way they love each other.

I don’t really know how to “help” them through this process – other than to keep showing up for them the way they have for others and to remember to be the best person they’ve taught me to be. It’s tough. Tough because I wish I knew more. Tough because being one’s “best” is not always easy. Tough because our roles are changing. For the first time in my life, I really truly don’t want to let them down…not at all. But the stakes are at maximum height now.

My still very alive Mom and Dad are glorious old bones. Watching them learn to live with this thing called “death” has shown me that most days are full of overlapping contradictions: working and resting, remembering the past and anticipating the future, expansion and contraction, living and dying. If you really look closely, you’ll discover that there’s always a little bit of both things happening at once. It’s called balance. They’ve had a deliciously balanced ride. They’ve often invited others to share the bounty of their love: laughter, learning, contentment, good food, clean sheets, safe travels, bills paid, kisses planted and tears dried. It’s been a safe and whole life. They have been my dearest friends. They ARE my dearest friends.

“You will lose someone you can’t live without, and your heart will be badly broken, and the bad news is that you never completely get over the loss of your beloved. But this is also the good news. They live forever in your broken heart that doesn’t seal back up. And you come through. It’s like having a broken leg that never heals perfectly—that still hurts when the weather gets cold, but you learn to dance with the limp.” ―Anne Lamott

...a meandering journal of a changing life and the unexpected graces it brings. Earlier posts may provide some history, but this series of writings aren't likely to follow a straight line as I explore topics such as raising kids, making choices, self discovery, the impact of change on a family and how to (hopefully) live with balance and purpose. www.marthaphelps.com
View all posts by Martha Phelps Studio ~ creative on purpose →
This entry was posted in Siftings and Essays of the Heart and tagged aging, change, Family, letting go, life and death, parents. Bookmark the permalink.