Posted on July 4, 2011 by Martha Phelps Studio ~ creative on purpose

There’s just something about holiday weekends….
they’re slower, calmer and sweeter (aside from the frequently higher than usual expectations with which they can be fraught….”but why can’t I eat a third Popsicle?”).

Today, we’re in Portland. The sky is gloriously blue, Mount Hood and St. Helens are competing for the “most stunning” award, parking is free in downtown and there are herds of Portlanders strolling about in shorts and sundresses showing a large quantity of very pale skin to the great Apollo.

At home in Ashland, friends we know are joined together with a bazillion folks we’ll never know under the bright sun to watch the fond spectacle of parading Americans. I can count on one hand the Ashland 4th of July celebrations I’ve missed in my lifetime; it’s my hometown’s big party, and this hometown girl is feeling rather nostalgic.

I love plugging my ears for the fighter jets’ fly over, the way my youngest child begins vibrating from nose to toes as flag bearing veterans march past, the sound of shod horses prancing on asphalt, the little gymnasts with wee white gloves protecting their nimble hands as they tumble and spin down the boulevard, and I love the way my chest aches with ancient pride as the Scottish Marching Band strides by with pipes singing and those delicious snare drums. It’s good stuff.

So – this whole “independence day” gig takes on a slightly different spin as we check Reid into the Bone Marrow Treatment Center at OHSU. You know, it feels like: “Happy Freedom! Now we’re locking you in for the next month or so.” Weird. And yet…

Within ten minutes of being in the room, we have put up 15 of Reid’s favorite posters: soccer players, Japanese art, a replica black and white of the The Rat Pack, The Beatles. He stands back, hands on hips and says, “There. It doesn’t look so much like a hospital room now. Except for that thing,” he gestures at the IV pole, “my stupid fucking dance partner.” And he’s right — about the unfortunate pole as well as the redecorated room — it does look a bit better. The Dr. Seuss quilt on the bed and John Belushi’s face (circa Animal House) on the door give the sterile environment a rather rebellious, even – dare I say? – independent feel.

Such is the state of this year’s 4th of July. A day of feeling nostalgic for home and the days before we ever imagined cancer – combined with a day of witnessing this young man bravely walking into a treatment center for what promises to be one hell of a ride.

As holiday weekends go, it’s been slow and calm, sweet with a twinge of bitter, and has ranked fairly low on the expectations scale. I’m not sad. Nothing has been missed or lost. It’s all just perspective and a declaration to celebrate life no matter where we’re located. 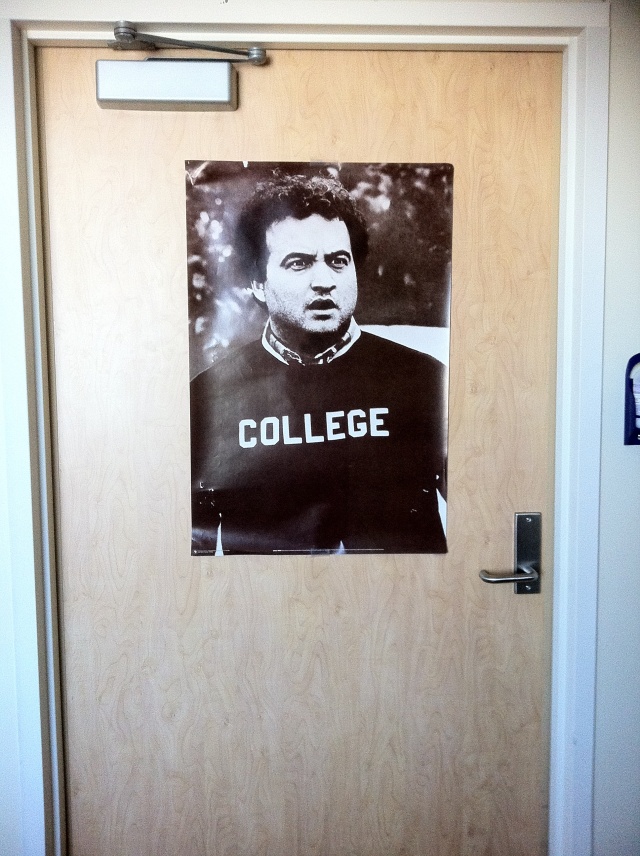 ...a meandering journal of a changing life and the unexpected graces it brings. Earlier posts may provide some history, but this series of writings aren't likely to follow a straight line as I explore topics such as raising kids, making choices, self discovery, the impact of change on a family and how to (hopefully) live with balance and purpose. www.marthaphelps.com
View all posts by Martha Phelps Studio ~ creative on purpose →
This entry was posted in Reid's Journey, Siftings and Essays of the Heart and tagged Ashland, Cancer, Finding balance, Healing. Bookmark the permalink.