Running away for pie

Posted on October 11, 2012 by Martha Phelps Studio ~ creative on purpose 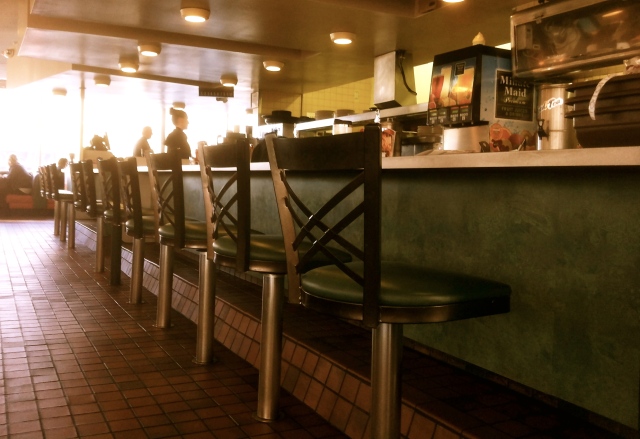 This post may land me in the “bad mother” stockade. But as I’m no longer raising wee ones, and my three offspring have clocked in at nearly thirteen, seventeen and twenty-two years respectively, and they seem to have turned out minus awkward quirks, socially unacceptable habits or evil malevolent tendencies – I’m going to risk a parenting confession.

There were times as a younger mother when I would be driving South along I-5, returning home from running errands in a neighboring community, when I would find myself wondering “what if I just missed the exit and kept on driving….how far would I get before the tank runs dry….what would it feel like to just disappear for a day or two, sit in unknown diners – eat pie, and have nothing to take care of other than myself….what if?”

And I’d shake off my guilty daydream and downshift onto the off ramp knowing that never in a million years of mothering, would I do such a thing. Some thoughts are meant to be acted upon, while others are best boxed and kept on a safe shelf in ones’ mind.

Imagine my surprise when one day in the middle of a conversation about the challenges of parenting, an older, wiser woman whose children had long since flown from the nest –  revealed boxed contents and spoke my fantasy out loud. She said, “I remember there were days when the kids were little – I just wanted to get in the car and drive away. Not forever, just for a while. Just long enough to catch my breath.” “Did you ever do it?” I asked. She shook her head and laughed, “No, but I sure had some great excursions in my head.”

My road trip reveries are a thing of the past now. They’ve been left with diaper changing, teething and sleepless nights. Now, if I’m going to drive off into the sunset – I’d just as soon have my kids come with me. Our time together is fleeting, and soon enough they will be rambling completely on their own…..heading down new highways, finding their own seats at diner counters, and ordering whatever suits their fancy.

...a meandering journal of a changing life and the unexpected graces it brings. Earlier posts may provide some history, but this series of writings aren't likely to follow a straight line as I explore topics such as raising kids, making choices, self discovery, the impact of change on a family and how to (hopefully) live with balance and purpose. www.marthaphelps.com
View all posts by Martha Phelps Studio ~ creative on purpose →
This entry was posted in Siftings and Essays of the Heart and tagged Family, Honesty, Motherhood, Raising kids, Reflection. Bookmark the permalink.

3 Responses to Running away for pie