Posted on June 21, 2018 by Martha Phelps Studio ~ creative on purpose 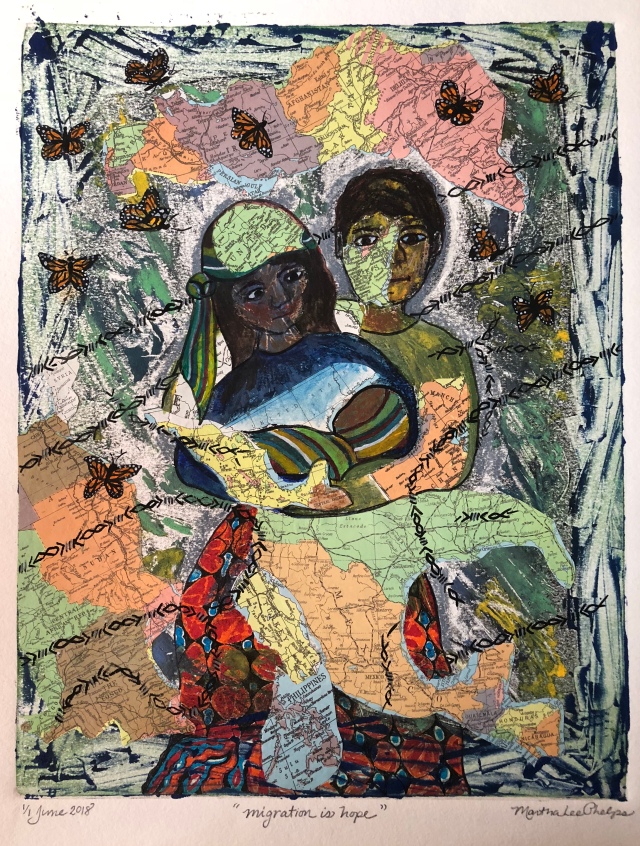 Inspired by Frederick Douglass, speaking in 1869 against the movement to ban Chinese immigration:

But are there not reasons against all this? Is there not such a law or principle as that of self-preservation? Does not every race owe something to itself? Should it not attend to the dictates of common sense? Should not a superior race protect itself from contact with inferior ones? Are not the white people the owners of this continent? Have they not the right to say, what kind of people shall be allowed to come here and settle? Is there not such a thing as being more generous than wise? In the effort to promote civilization may we not corrupt and destroy what we have? Is it best to take on board more passengers than the ship will carry?

I submit that this question of Chinese immigration should be settled upon higher principles than those of a cold and selfish expediency.

There are such things in the world as human rights. They rest upon no conventional foundation, but are external, universal, and indestructible. Among these, is the right of locomotion; the right of migration; the right which belongs to no particular race, but belongs alike to all and to all alike. It is the right you assert by staying here, and your fathers asserted by coming here. It is this great right that I assert for the Chinese and Japanese, and for all other varieties of men equally with yourselves, now and forever.

I know of no rights of race superior to the rights of humanity, and when there is a supposed conflict between human and national rights, it is safe to go to the side of humanity. I have great respect for the blue eyed and light haired races of America. They are a mighty people. In any struggle for the good things of this world they need have no fear. They have no need to doubt that they will get their full share.
But I reject the arrogant and scornful theory by which they would limit migratory rights, or any other essential human rights to themselves, and which would make them the owners of this great continent to the exclusion of all other races of men.

I want a home here not only for the negro, the mulatto and the Latin races; but I want the Asiatic to find a home here in the United States, and feel at home here, both for his sake and for ours. Right wrongs no man. If respect is had to majorities, the fact that only one fifth of the population of the globe is white, the other four fifths are colored, ought to have some weight and influence in disposing of this and similar questions. It would be a sad reflection upon the laws of nature and upon the idea of justice, to say nothing of a common Creator, if four fifths of mankind were deprived of the rights of migration to make room for the one fifth. If the white race may exclude all other races from this continent, it may rightfully do the same in respect to all other lands, islands, capes and continents, and thus have all the world to itself.”

For a look back when the work was in progress: “Let Them In”

...a meandering journal of a changing life and the unexpected graces it brings. Earlier posts may provide some history, but this series of writings aren't likely to follow a straight line as I explore topics such as raising kids, making choices, self discovery, the impact of change on a family and how to (hopefully) live with balance and purpose. www.marthaphelps.com
View all posts by Martha Phelps Studio ~ creative on purpose →
This entry was posted in Art Projects, Siftings and Essays of the Heart and tagged #frederickdouglass, #makeart, #marthaphelpsstudio, #migrationisahumanright, #migrationishope, #turningsorrowintoart, artimitateslife, chasingart, familiesbelongtogether, Family, freedomforimmigrants, immigration, keepfamiliestogether, letthemin, mixedmedia, originalartwork, Resist. Bookmark the permalink.

4 Responses to “migration is hope”