Posted on January 5, 2019 by Martha Phelps Studio ~ creative on purpose 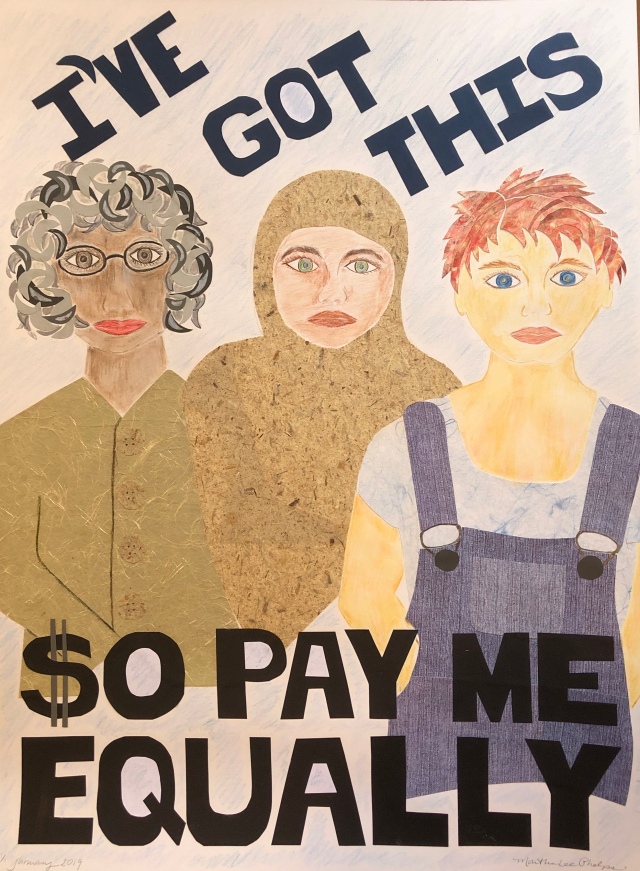 Women are STILL not being paid equally. Unequal pay hurts women. It hurts families. It hurts us all. Every woman deserves to get paid what they’re worth.

The gender pay gap is the gap between what men and women are paid. Most commonly, it refers to the median annual pay of all women who work full time and year-round, compared to the pay of a similar cohort of men. Other estimates of the gender pay gap are based on weekly or hourly earnings, or are specific to a particular group of women.

The ten occupations where women collectively lose the most money include: financial managers, physicians and surgeons, retail supervisors,  registered nurses, marketing and sales managers, lawyers, chief executives, medical and health managers, and education administrators. In some occupations, women collectively are receiving billions less than they would if they were paid the same as men in that occupation.

This is Protest Poster #7  from the collection “She’s Still Here”A collection of women’s protest art supporting the equal and human rights of folks from all walks of life, regardless of gender, race, origin, wealth, nationality, religion, ability, sexual orientation, identification or representation.

...a meandering journal of a changing life and the unexpected graces it brings. Earlier posts may provide some history, but this series of writings aren't likely to follow a straight line as I explore topics such as raising kids, making choices, self discovery, the impact of change on a family and how to (hopefully) live with balance and purpose. www.marthaphelps.com
View all posts by Martha Phelps Studio ~ creative on purpose →
This entry was posted in Art Projects and tagged #marthaphelpsstudio, Activist Art, Art, Equal Pay, Gender Pay Gap, Gender Pay Ratio, Original Art, Protest Art, She's Still Here, Women's March 2019, Women's Rights. Bookmark the permalink.